I’m currently on a break from blogging. The last six months have been quite busy and a lot of things have changed. This website isn’t going anywhere, but a change is coming. I haven’t decided what I’m going to do with the site, but I’m shooting for a redo sometime between now and 2012.

Got any suggestions? Thinking about dropping WordPress for Octopress, or maybe even building my own website again and maybe aggregating all my other online accounts to make a sort of Eric Central if you will.

In the meantime, feel free to click around and see what I’ve already got on the site. You can still find me contributing to the internets on Twitter, and where ever else the nets takes me.

UPDATE 3.24.11- The owner of the McDonalds called and sounded very sincere on the phone, while having no idea how his restaraunt was being run. We were offered more free food, but politely declined. McDonalds’ insurance has now served Tyson Foods Inc with a bone notice.

Tyson Foods make McDonalds Chicken McNuggets, and some have bones

“The chicken mcnuggets already come packaged and prepared to our insured location and they are not altered in any way; therefore Tyson Foods Inc. may be liable for said incident.”

Wow, my image of McDonalds is going right down the tubes. They don’t actually make their food, they just heat it up and put it in a bag? I’m loving it!

I’m not a litigious guy, but I feel like something needs to be said about McDonalds and the bones in their Chicken McNuggets. Tonight is Friday, so the wife and I took the kids to McDonalds so they could play with their friends on the playground. Tonight was mostly like every other Friday, except that Fletch received two surprises in his happy meal.

The chicken bone came as quite a shocker. Fletch was eating slow as usual and got really weird, then started spitting out his nugget onto the bench. At first I thought he had a cough and was trying not to choke. After I cleaned all the mush off the bench I found this CHICKEN BONE!!! 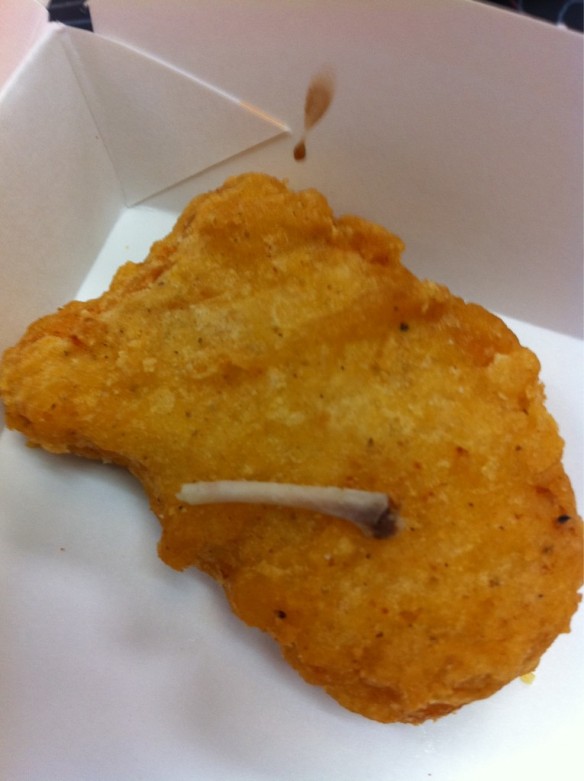 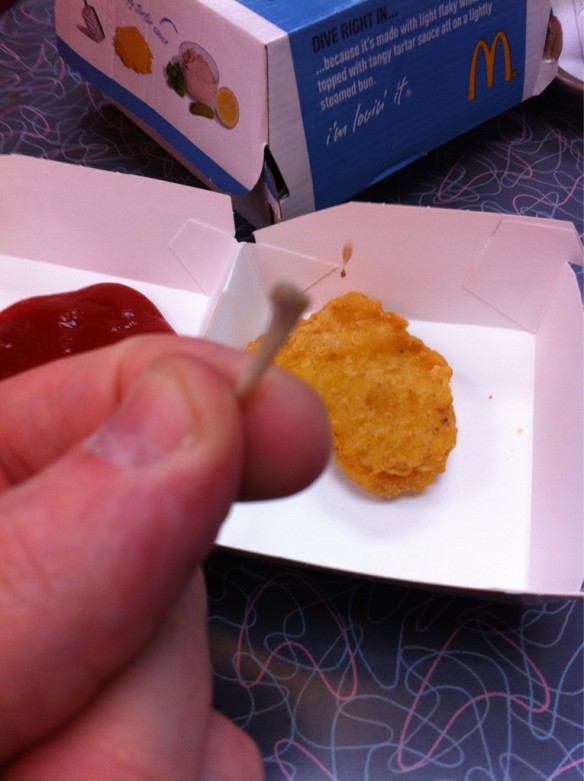 The manager of this location showed zero sympathy that my three year old just bit into a chicken bone and said we have to fill out an incident report. Notice the form is folded in half. The manager gave my wife Jenn the form folded in half and said to fill out our name and phone number. He will fill out the remainder of the form. He also said this isn’t the first time this has happened, and that McDonalds will just recall the batch of chicken that our bone filled McNugget came from. 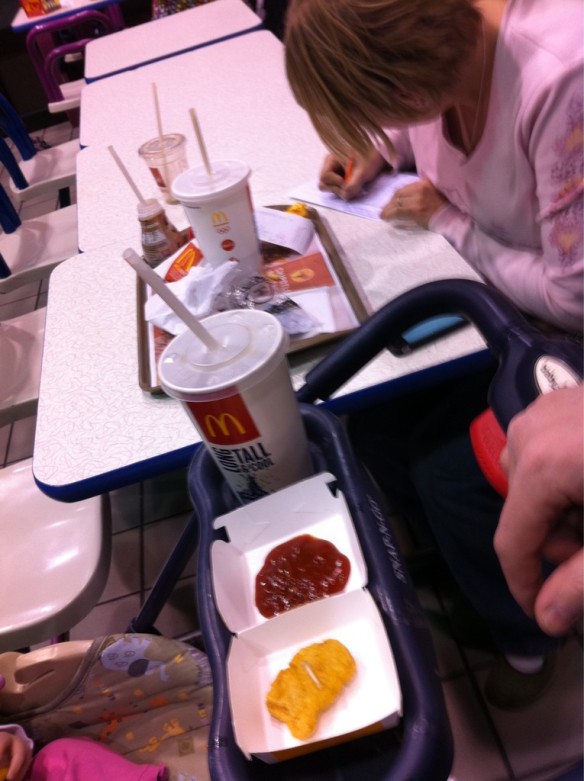 Something else I’d like to point out is McDonalds says on their website their chicken McNuggets are boneless.

While most chicken McNuggets are probably boneless, I consider this a straight up lie. How can big corporations like McDonalds get away with bold face lies and nobody does anything about it? In the past I didn’t care because I knew their food was shit, so I didn’t eat there ( even though I did grow up on McDonalds ). Now that I’m a parent, my wife and I are no match for the marketing power of McDonalds, their toys, and their Playplaces.

So, that’s all I know to do right now, make some noise. McDonalds will continue selling their mostly boneless chicken McNuggets and silencing anybody who finds the golden nuggets with bones.

If you think I’m crazy, you can ask Google about bones in Chicken McNuggets. If you’re into Facebook, there is a group you can join called Mc Donalds chicken nuggets DO contain bones!! 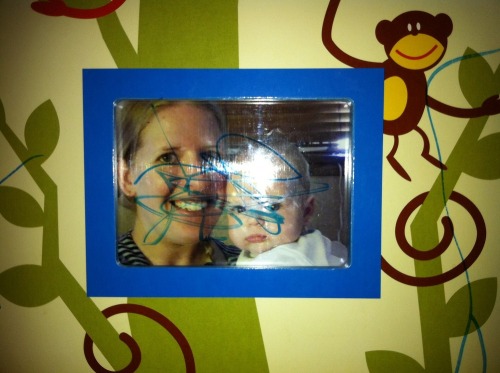 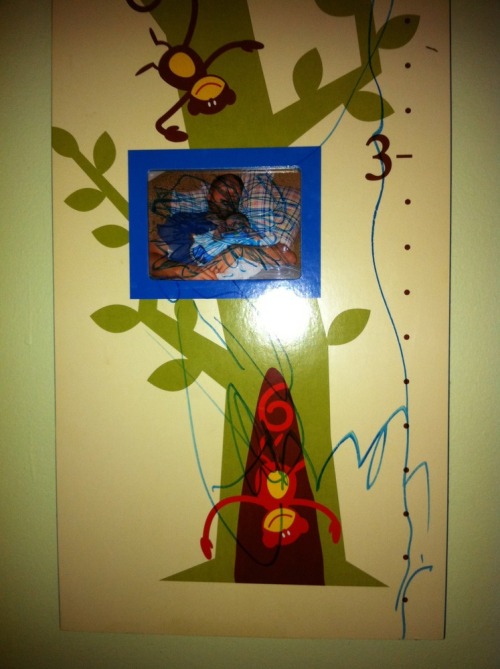 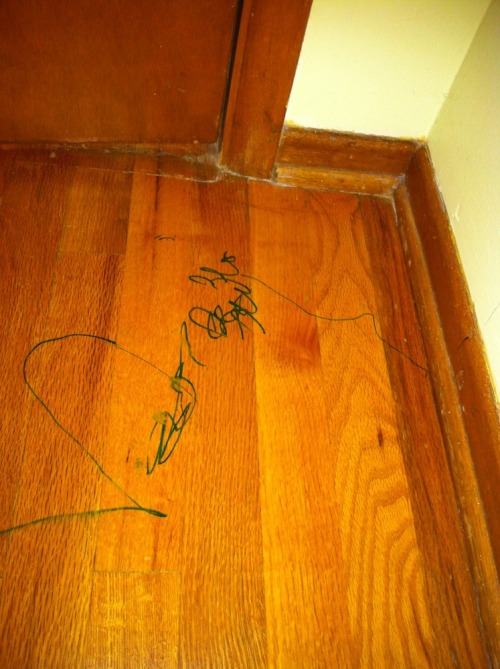 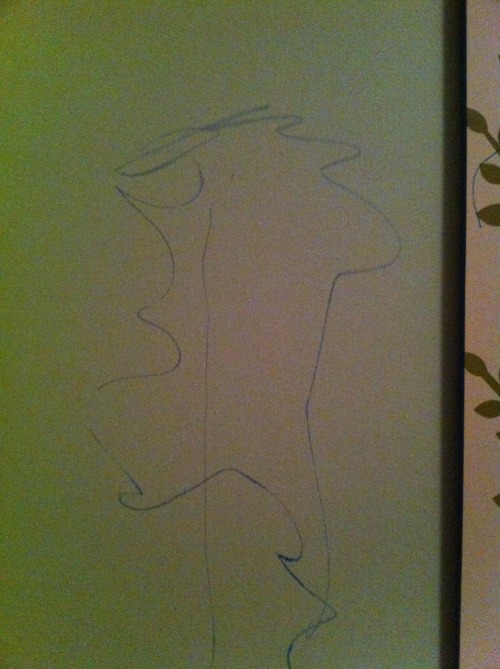 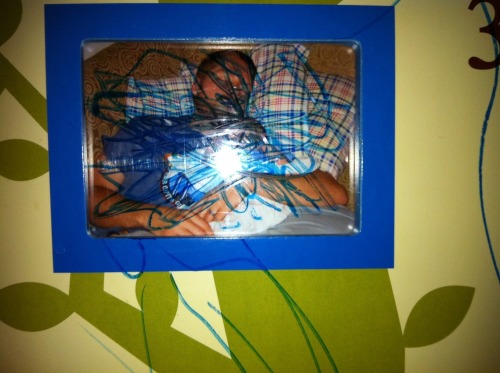 I’ve been wondering just how long until Fletch starts drawing. Turns out it takes just over three and a half years. 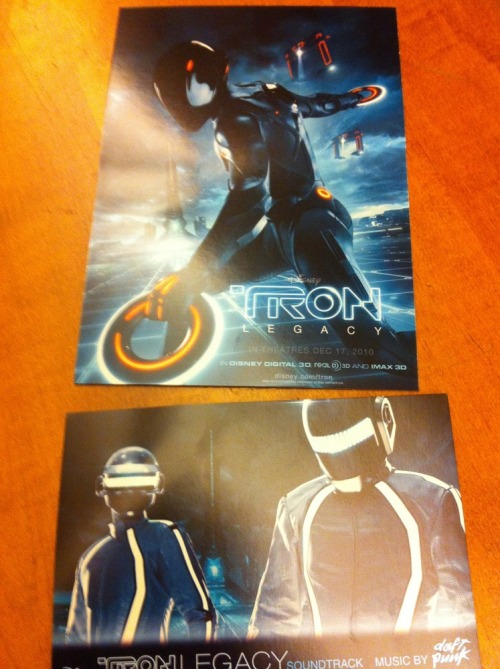 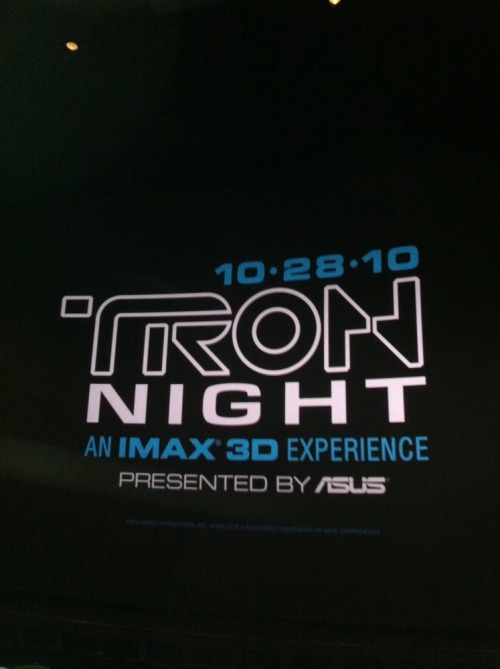 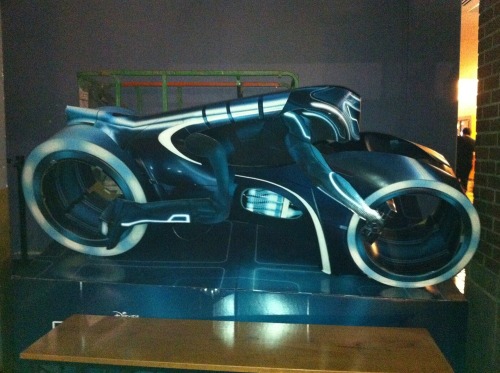 I saw a 23 minute sneak peek of TRON:LEGACY on Imax last night. The teaser blew me away, now I can’t wait for December 17 when it comes out in theaters. My iPhone dide make it into the theater, but I failed at bootlegging the preview.

Take my word for it. If you like the original Tron, super high tech design, or Jeff Bridges, go see TRON:LEGACY in December.

I just noticed something when running some batch files on Windows 7. If I launch the file from Windows Explorer, the path in the command window matches the location of the batch file.

The paths, they match!

However, I typically launch my batch files from a toolbar on my taskbar that points to the same folder.  The batch file still works, but the path shown in the command window is weird.  I have no idea how an Adobe Version Cue path could get injected, but it does. 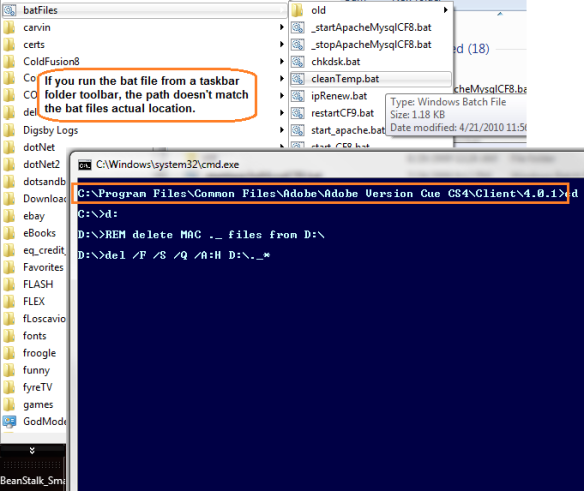 To capture both shots of the command window I had to hit Pause.  These aren’t faked, they’re just completely random.

Hey, we should jam! Yeah, we totally should. No seriously, we should jam sometime. We can play bad 80s cover songs and play under the name April Fools.

That’s the gist of how my current band formed. A handful of computer programmers who used to play in bands decided it was time to get back on the music horse. At first we had five or so people interested in jamming and seeing where things go. A few jams later and we were down to the power trio that is now known as The Compilers.

The name of the group didn’t come around until a month or so after we had been jamming as the April Fool’s.  All three of us are internet programmers who work with Adobe’s Flash platform, as well as contribute to our local Adobe community.  About the time we officially became a power trio we were kicking around the idea of becoming the house band for our local user group meetings ( RMAUG ).  In the process of laughing this one out, we were asked by RMAUG to play an upcoming Adobe technical event that was happening in two weeks.  That technical event was the “Next Generation Flex & Coldfusion Tour“.

At first we were hesitant booking a show when we didn’t have a real band, or enough material to play a show.  Long story short, we decided to play the show, decided to name the band The Compilers, and decided we should probably integrate some sort of tech into this show.  We didn’t set out wanting to mix technology with music, it just seemed appropriate for this first gig to do something technical.  That technical music nugget is now known as Tweet Jam, our smash hit that plays tweets from @thecompiler‘s Twitter timeline while the band plays underneath the robot voice.

That first show was fun, funny, and the beginning of an interesting musical project.  In the last six months we’ve played four shows, and we gave a presentation at the 360|MAX unconference at Adobe MAX 2009 in Los Angeles, CA.  This really isn’t a lot of gigs, but considering we started this band in June, it’s been quite a whirlwind of musical and technical action.  Jun has built at least three versions of the TweetJam application, as well as integrated his midi foot controller with TheCompilers Flex player.  I’ve gotten pretty comfortable playing iPhone, made a few Flash movies for our set, and started looking into sound generation with Sonoflash.  Scottie has been the mad scientist behind the green velvet curtain.  Drummer man, electric drummer man, sound man, idea man, recorder man, crazy Brazillian ghord instrument player.

It’s so great to be back in a band.  These last six months have been a blast, and it was all started from a few jokes.  Speaking of jokes, below you will find two flash movies that I built for our 360|MAX presentation, as well as our talk.  The concept of melding tech with music is new to us, so this talk was a bit off the cuff, but it was still a great time.

It’s a Laser! – My first experiment with the Sonoflash library.  Adjust your laser properties then click shoot.  Each slider has a keyboard listener.  Attack = A, Release = R, and Frequency = F.

By Note – This sample is the beginning of layering sounds and controlling notes and octaves.  This one can play the major notes C, D, E, F, G, A, B using your keyboard and the play button.  The octave controller on the right is powered by mouseover, 1 is low and 9 is high.  The sounds also have keyboard listeners.  Laser = 1 and Ping = 2.  Note, the event listeners don’t kick in until after you’ve clicked a button, so it may be quirky at first.  I built this on the plane ride out to LA and couldn’t figure that one out. 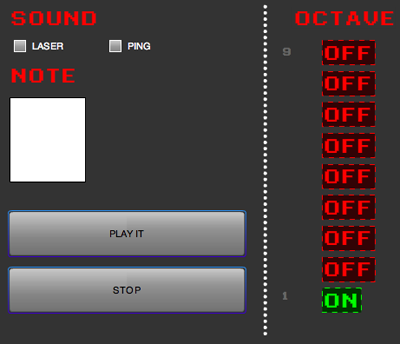 @thecompilers at 360 MAX from Eric Fickes on Vimeo.

American guitar legend Les Paul passed away today.  While I haven’t had the pleasure of owning a Les Paul myself, I have worked with musicians who did, and I understand the love.  Back in my Midget Farmer days we recorded a song to honor this great man and his legendary guitar.  This track was written by guitar demon Danny ‘Bloodspoon’ Grady, who graced us with his presence whenever we played this tribute live.  Here’s the studio version that appeared on our album “America’s Place to Waste your Life” released in 1993.

Over the years I’ve wrestled with a good system for archiving code snippets.  From posting on blogs, to filling up my hard drive with example files, there hasn’t been a system that stuck with me.  If you google up code snippet sharing you’ll find all sorts of sharing services to suite your needs, and they all pretty much do the same thing.

In step 3, be sure to make the subject of the email descriptive enough for the code you are sharing.  This will become the title of your posterous blog post.  Here’s what the final gist drop looks like on Posterous.

In case you haven’t looked into code sharing yet, here are a few to get you started.  I wanted to keep this brief, so be sure to check these out on your own to decide which you like best.  If you feel that I missed any noteworthy services, please leave a comment below.

I scored a goal in my hockey game tonight and didn’t realize how awesome my goal celebration was.

notice how amazing this goal is 😉

Giving thanks to the hockey gods

On tuesday the 24th, a train was passing behind the in-laws’ neighborhood and sparked a fire.  Initially the folks couldn’t tell where the fire was coming from and called us over to help water the house.  By the time we got there it was determined that the fire was not going to reach their house, but it did ignite a home four houses down.  Luckily this house was just outside the property line of the neighborhood and did not spread inside.

The bad news is that home burned down.  Fortunately nobody was hurt in the fire, and the single resident, a 90 year old lady, was evacuated in time.  Here are some photos I snapped on my phone.

Here are some shots I snapped as I was driving up to the neighborhood.

sequence of shots taken while driving

Here is a panorama from near the fire.  Notice how much land the fire coverred.  The owner of that house was watering his property the entire time. The fire came right up to his fence, but did not catch.  Thank goodness.

sketchy panorama of the scene of the fire